I tried walking, then a personal trainer. But only yoga worked. My video tells the story.

It was a few years ago that I (Angie Sublime) first started noticing the menopausal symptoms of hot flushes. I was also feeling more fragile and anxious. It was similar to the experience of pre-menstrual tension. Here’s how I got to checking out yoga studios near me, and my story on the way… including a tiny yoga video!

The weight gain I experienced was gradual. But I gained about 12 kilos (or 26 pounds), over about a five year period.

Meanwhile, I was on a natural hormone replacement treatment, and doing aerobic fitness in the form of walking.

Still, the same waistline issue remained. It seemed to be out of control!

I had a group of three or four friends that used to walk with me every morning. But despite the exercise, I was still putting on kilos. 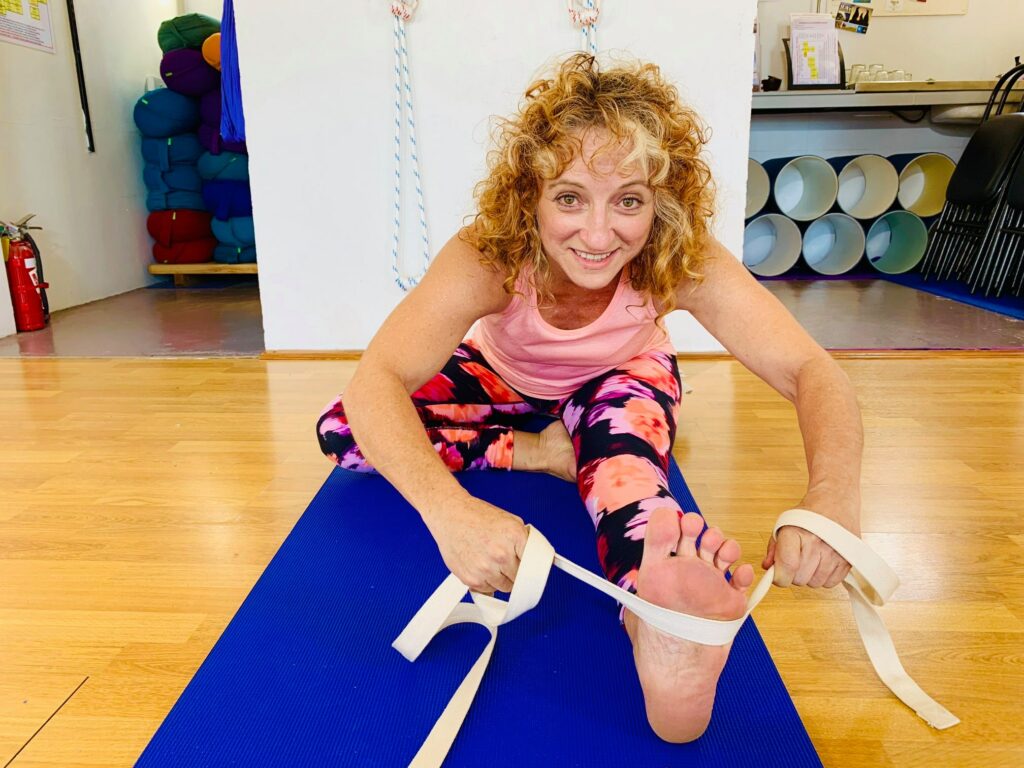 When nothing else worked, I (Anglie) looked for yoga studios near me

Then my group of friends decided we needed a personal trainer to work with us.

So we organised personal training three mornings a week and walked for an hour every other morning.

However, despite the effort and exercise, there was still no change to my gradual weight gain.

Even worse, the personal training was definitely not fun. I found myself waking up angry at the thought of doing it.

Of course I’d tried dieting. I also onsulted a dietician, and ate a lot less food. But that also had no impact!

Below, you can see a picture of me when I was walking and doing personal training …before I started yoga. I’m in the red dress.

That’s me on the left, before I started yoga

I eventually said to my exercise group of friends … “no offence, but I don’t like this personal training.  What do we do”?

My yoga studios near me search begins

In the past, I had ‘played’ with yoga postures using an instructional yoga video. (I now realise it was coincidentally from an Iyengar Yoga video, like Flametree Studio).

I had tried to learn the ‘video class’ as a routine. I knew yoga was something I wanted to try again. But I felt I needed guidance.

I mentioned the Flametree Yoga advertisement I had seen on Flametree’s Facebook. I suggested to my friends that we give it a go.

Several of us enrolled.

I found the number of class type options and the extensive timetable was great. This meant there was no excuse for not being able to attend classes many times a week. There was at least a class time, if not many, that worked for everyone!

Video of me at a gig. Plus my yoga story!

Me, Angie, at a local Darwin gig

Over several months, I lost all that waist that had come with menopause … without even trying.

I’m told that it is at least partly due to the fact that yoga reduces stress. In the process, it also leads you to eat more mindfully.

Whatever the reason, it certainly has worked for me in both weight loss and stress management.

I also say yoga has kept me “sane”. I mean that I notice a greater sense of calm and a lightness of mind. It’s an unexpected benefit of practising yoga.

In addition, it has definitely helped me cope through recent stressful and trying times. So that is now also a big part of why I choose to continue to practise yoga.

I have also noticed a ‘sense of physical lightness’. It appears to come from my greater awareness of my ‘physical self’, and of where and how ‘my’ body moves and works in space and time.

Many impacts, including no pain

Over the years, I have watched many of my friends suffer physical pain and limitations due to their bodies. I’m incredibly grateful that I now have no pain anywhere in my body.

Yoga has also improved my flexibility and core strength.

I have a very physical job, part of which requires me to lift heavy sound equipment. For me, lifting 30 kilo equipment now feels like nothing… despite it being half my body weight.

That’s because in my yoga practice I’m often lifting my entire body weight!

There’s also the physical benefit of improved stamina. I noticed over time the ease with which I am now able to do some of the yoga postures has greatly improved.

A good example of this for me is my learning of the headstand. I used to breathe heavily. I couldn’t sustain this posture for any length of time.

However I am now able to maintain the headstand position easily, and with much less effort. That’s me in headstand, below. 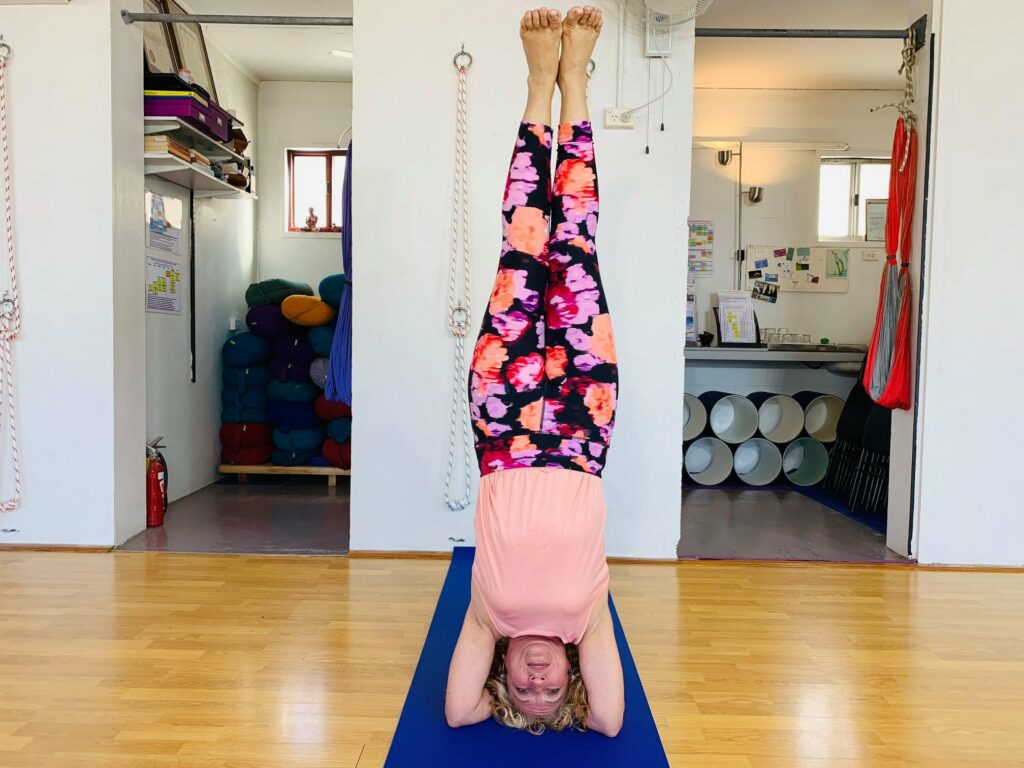 Over several months of beginner preparation poses, I learnt the headstand, and much more

My friends thought it was too easy!

I find it interesting that comments from some of my work colleagues about yoga include “that it looks like you aren’t putting in any effort.”

Others say things like: “It looks too easy. It isn’t physically challenging enough for me”.

So I challenge them to come and join in on a yoga class. I say if it appears to be that easy, then anyone can in fact do it… so give it a try.

The truth of the matter is that anyone can in fact do it!

But it is of course physically challenging at times, depending on the posture or style of class.

And remember, if someone makes something look easy, it’s usually because they are very accomplished at it!

Yoga definitely builds physical stamina and strength…while looking like you are relaxing!

I have found the teachers at Flametree Yoga to be second to none.

I’ve been learning not only about the physical side of yoga but more importantly the inner game of yoga. It’s about observing yourself and your attitudes on a daily basis.

Observe the sensations within your body while doing your yoga practice. They are messages to you about your physical body. Notice also the mental resistance or willingness to do certain poses, or be ‘with’ the sensations.

Don’t get involved in the drama you tell yourself about the sensations such as ‘ I can’t do this’ or ‘it’s painful’.

Most importantly, just be kind to yourself in your yoga practice.

Over the years, I have enjoyed every class at Flametree Yoga that I have attended. Every teacher has been a pleasure to be taught by.

Yoga has also created a new network of friends. That’s been another unexpected, wonderful outcome.

As a professional singer, I also noticed many similarities between the study of music, and the study of yoga.

First, yoga is about a little bit every day. It’s about the benefits of long term practice, and less about instant gratification.

In fact, yoga is all about the word “practice” in every sense of the meaning of the word. It’s about the verb of ‘doing’ practise every day, as well as the noun of having ‘a practice’ as a part of your life.

So, in this sense too, yoga and music are also the same.

I still enjoy music lessons as there is always much to learn. Music is a life-long learning journey.

Again, doing yoga is a similar experience. The discipline of attending lessons requires you to continue to practise and learn.

In addition, you also need to make sure you practise even the bits you don’t like!

To master music, or just to get lots from it, you need to make it part of your everyday world. You need to use the same approach with yoga.

Helps my singing, and my breathing, and more

For example, “Mountain pose”, is one of the first yoga postures taught in the beginner classes or beginner course. This pose is also the perfect posture for singing.

For a start, singing requires good posture. In order to sing well, the large muscles of the body need to support the small muscles of the vocal anatomy.

More importantly, the muscles need to be able to move freely for both singing and speaking. We call it ‘anchoring the voice’.

So yoga quickly helps you to improve your singing, and become more aware of good posture. That’s useful for many aspect of your life and health, including for your breath.

I cannot say enough about the positive impact Yoga has had to my life.

Because of all this, I say to everybody, give yoga a go. 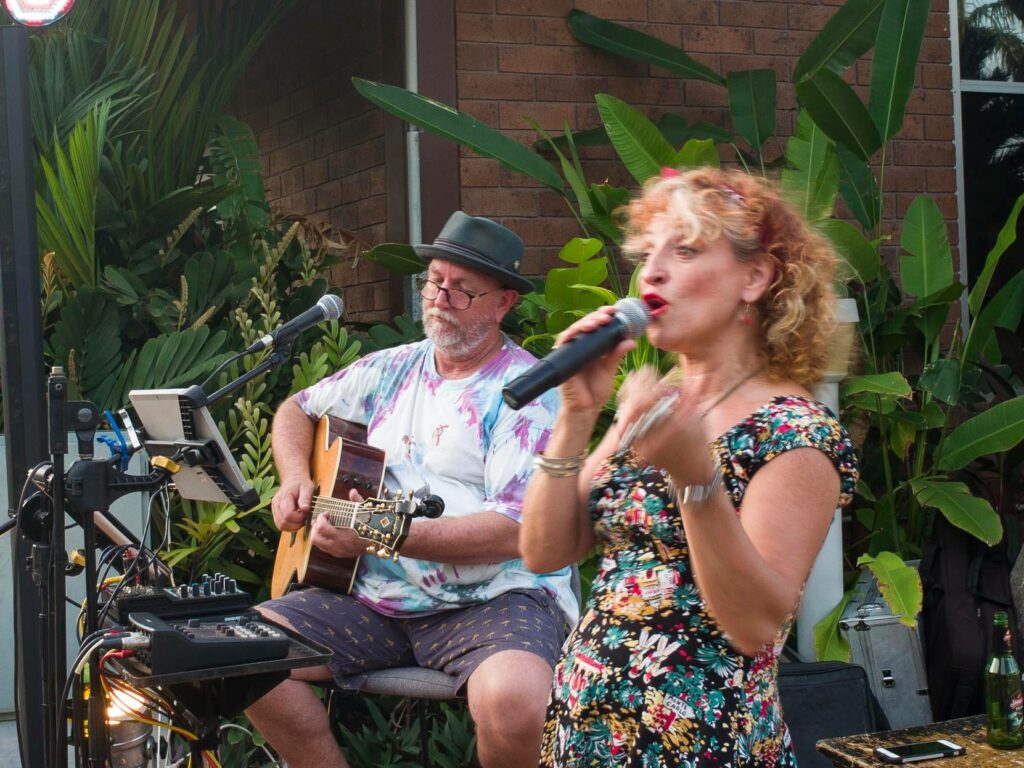 With both music & yoga, you still need to practise even the bits you don’t like!

At the beginner timetable, there is also a time zone converter which shows the times in your local time zone. (Look immediately under the timetable grid to see the local time zones.)

The classes are all standard, introductory hatha yoga poses.

Beginner level yoga can be started at any time.

There’s also a two week free trial. You need a credit or debit card, but unless you continue after the trial, you pay zero.

Beginners can just pay week to week, or there is also a beginner course, in-studio or online.

If you are in the Darwin region, there will be yoga classes in each of Palmerston, Casuarina, CBD, and Woolner.

In addition, here are the best options for IN-STUDIO Darwin City & region classes.