In my opinion, body building in any gym near me is not useful, to say the least. But I (Stuart), once fell for it too. So, in my local area, here’s why I don’t find it useful to look for “gym Darwin city”, or search for any Darwin gyms and fitness centres.

As a ten-year-old, I had the flexibility to sit on my butt, in between my legs. I mean my knees could spend backwards under me, and I was entirely comfortable.

My father remarked on it one day as we sat under a tree, in outback Queensland, Australia. We chatted as we ate the crumpled sandwich lunch from our saddle bags. We were out on horseback chasing cattle.

It was a rigorous, outdoor life. I had plenty of stamina, strength, and flexibility. I was amused that the adults found it surprising that I could still sit in such an apparently unconventional way.

Years later, I discovered that I was naturally in a yoga posture called “Reclining Hero” pose (or Supta Virasana in Sanskrit).

As a kid, I natually had the flexibility that no Darwin gyms and fitness programs would ever be likely to give me. It’s nothing to do with the fact they are part of the gym Darwin fitness scene. It is just the nature of body building itself. It does not build the lean flexibility that is the asset that I want.

Plus, it does not give me the calmness that I now understand is critical for my health. 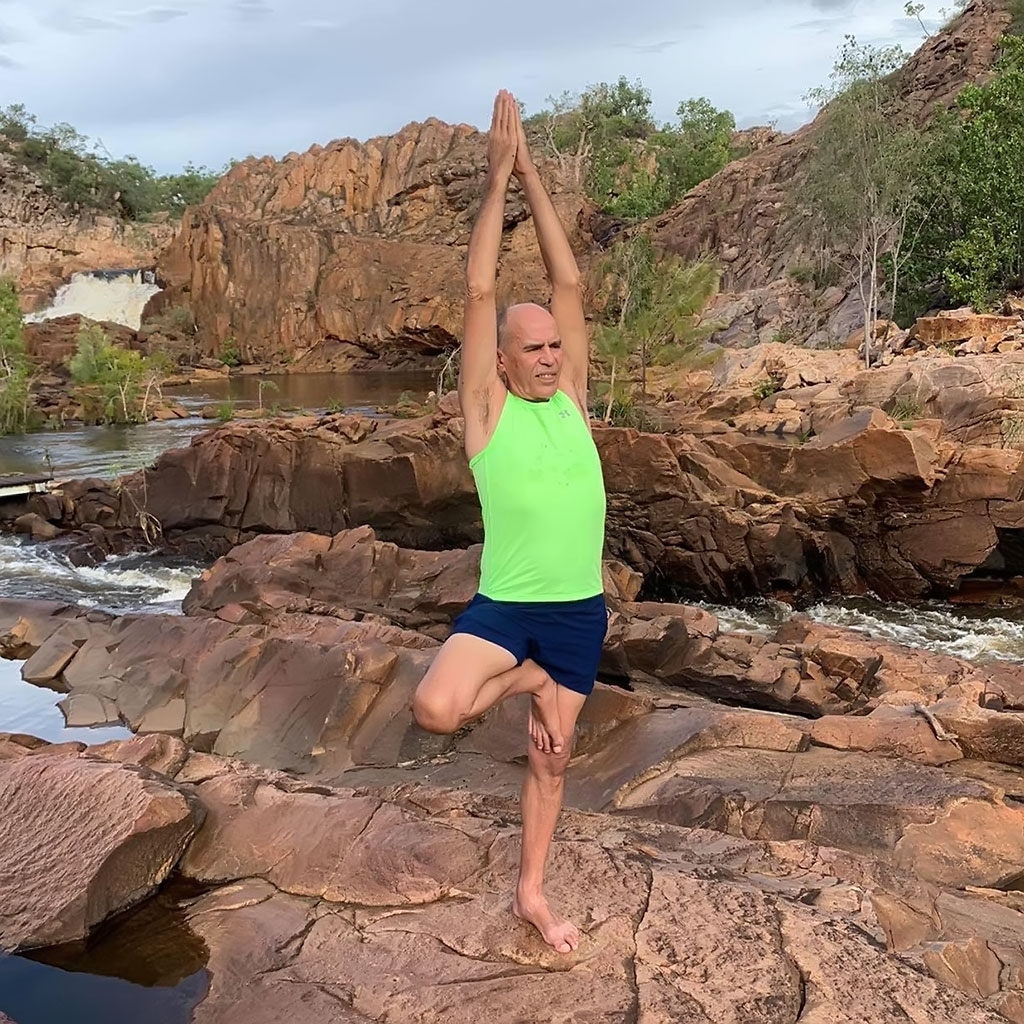 What it takes to be successful with girls!

For me, as a young person, my decline started soon. When I was 14, I fell for the idea that I could be successful with girls if I had a “body”.

So I ordered the “Bullworker” that I had seen in a magazine. It had to come by mail truck to our remote outback cattle station. I was a bit embarrassed about it, so I carefully hid it from my mother!

It was a device for so-called isometric exercises to build muscles. It worked.

But of course, for the first time, I got stronger… and less flexible. (It was many years later that of course I also discovered that my approach to what women wanted had been hopelessly simplistic, or just plain wrong, or both).

Building muscles also made me stiffer because it was an approach that did little or insufficient stretching. It also led to building unnatural muscles, and led to uneven development of my muscles.

It was the sort of body building that goes on endlessly in any of the Darwin gyms and fitness centres close to where I live.

In my late 20’s, I then started yoga. By that time, I was already seriously stiff, due to the conventional approach to muscle and bodybuilding. I could hardly sit upright, let alone move forward.

By that stage, at boarding school and as a rugby player at university, I’d had 15 years of sport and physical exercise, including via my bullworker!

When I started yoga, at 27, I still had plenty of upper body strength. I could stand on my hands, and then walk down the yoga room on my hands.

If you think about it, any inversion like that means you are lifting your whole weight… of over 70 kilos in my case. But in everyday terms, I was as stiff as a board.

I thought it was about getting harder, bigger muscles

So, like many men, I had all that upper body strength, but I was so stiff that I could not bend forward, or touch my toes, to save my life! I had bulked up, but it wasn’t working for me.

It was confirmed by the fact that at one point a grumpy ex called me just a “rugger bugger”.

It was made worse by plenty of long-distance running, in both gyms and outdoors, so my thigh muscles were hard… and short. They were so short that it’s taken years to stretch them to the point that is naturally available to many of the women who now inhabit Flametree, my local yoga studio.

Stupidly, in my mid-30’s, I then gave up yoga and took up long distance swimming at pools all over Melbourne, and wherever else my travels took me. In hindsight, I was heading even further backwards.

I bought the myth that only that type of exercise and movement could improve my cardio fitness… and make me look good! As we now know from studies, yoga could have given me all the cardio fitness I needed.  It would have been a lot less boring as well! Plus long, lean and well aligned yoga bodies are now well known to look good as well.

Anyway, thousands of kilometres of swimming later, I was even stiffer. And the swimming still didn’t head off the middle-age spread or belly fat. Now I was stiff, overweight, and less strong!

I had gone all the way down the path that I see with men who turn up to my yoga class who have been doing too much, in my opinion, of the Darwin gyms and fitness options.

“Why do all the men I live with all get fat!”

At one point, my woman friend even complained: “Why do all the men I live with all get fat!”.

I thought it was pretty rude at the time, but it was a wake-up call that cut through me heading down an ever more sedentary and sugar filled life… with a conventional (gyms Darwin City) approach to trying to get fit.

Luckily, in Sydney, a friend of mine had a house near to a good quality Iyengar yoga studio.

I started doing almost daily early morning Iyengar yoga classes. I noticed that stiffness and flab started to disappear. It still took me months to re-relearn how to do a handstand so I could lift all my own weight again. But I was back on the path.

Meanwhile, I still laboured under the illusion that I had to tackle yoga as a kind of “workout”.

I used to get frustrated with yoga classes that were too slow, or not “physical” enough. The conventional notions of building fitness and strength were hard to overturn in my mind. But when I finally started regular yoga at Flametree Yoga, I learned why I should finally ditch my erroneous approaches.

I was totally ignoring one nervous system

Chris Lalor, the Senior Teacher at Flametree, who had a strong intellectual background as well, explained to us all how we needed exercise that worked on both our nervous systems.

Without more balance, de-stressing and wholistic health, bad things happen all too quickly. I mean like the headmaster of my old boarding school where I started my conventional fitness path, who apparently died in our school chapel from a heart attack… at an all-too-early age.

I didn’t exactly mourn him… because he had used the cane on me too much!

But I did think about how a tough guy who was the boss of a navy ship during the second world war, could end up in such unhealthy shape.

Flametree Yoga Studio classes taught me how conventional body building, fitness and gym, works far too little on the nervous systems that calm you down. In turn, that calmness and mindfulness also then has you think more about what you consume, and how much of it you consume.

I was off the Darwin gym near me treadmill… but others weren’t!

Now, at Flametree Yoga, as I got calmer, de-stressed, and less angry, I also got leaner and stronger. The process continues, even as I head rapidly towards my 70’s.

In contrast, a typical situation is a friend of mine who still regularly goes to the gym, but has high blood pressure and a bag of prescription pills that travels with him everywhere. He, like a significant percentage of Westerners who have blood pressure issues…have nothing but more health troubles coming down the pipe.

Sadly, in his busy Western life and travels, he is always on the phone searching under the “gym near me”, or “gym Darwin City”, category. He refuses to entertain the idea that it will not get him to where he needs to be.

Doing a balanced amount of the right yoga poses could change all that for my friend, and many others… as well as give them plenty of conventional fitness.

My friend holds onto the conventional myth that is sold to us … that the only way to get fit and strong is in the normal gym Darwin City type of program.  This whole path to fitness just drives more of the sympathetic nervous system hype and “busyness” that is the dominant way we all spend too much of our modern life.

In our conventional world, there is no time to chew over the differences between yoga and gym.

Gym Darwin City, or any gym, is a part of being revved up all the time!

We are hyped up at work, in our leisure, and in our gym time. Most of what we do, everywhere, just revs up our nervous system.  We take no time to do activities that calm us down… as well as stretch and strengthen us.

Yoga, with its balanced approach, including its restorative yoga poses, gives everything I need by way of fitness, strength, flexibility and calmness.

It also gives me a bunch of other proven health benefits that are likely to keep me walking around this planet happily for many years longer than conventional, so-called fitness at gym Darwin City, or any other gym near me.

Best yoga deals, instead of Darwin gyms and fitness options

There’s more about the huge benefits of yoga for men, here.

The next 4 week beginner yoga course, with up to 2 weeks free, is one good way to start.

You don’t need to be flexible to start yoga. The beginner poses are easy, introductory poses. There are even special, optional beginner classes like Gentle Yoga, Backcare Yoga, and Easy Restorative Yoga. You can see them all in the beginner timetable.

Try Beginner Yoga via a week-to-week pass, online or in-studio, or both, with a 2 week free trial and money back guarantee. With this pass, you can start anytime.

The beginner double pass even gets you 25% off for both starters!

Non-beginner yoga students, who are newcomers or lapsed at Flametree, get 14 days of unlimited non-beginner classes for $29 (online or in-studio, or both), here. 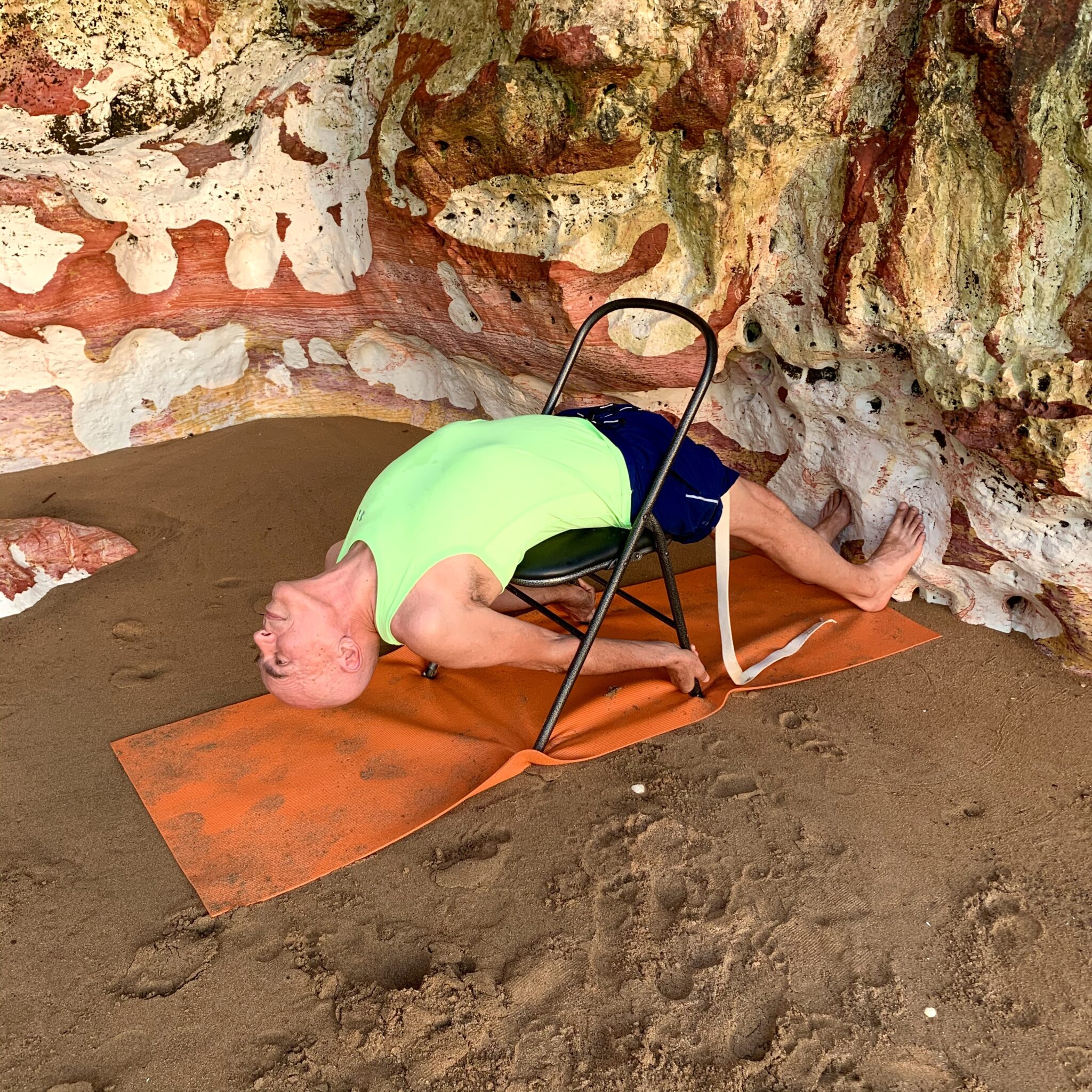