Periods time can be a pain! Good yoga can make painful periods a thing of the past. To show why, here are my period pain stories. Try yoga, & get 2 week’s free.

But within 3 months of starting yoga, the pain, bloating, backache, headaches and irritability that I had always suffered during my menstrual cycle, all but disappeared.

My periods and its effects were relatively normal, but I still had plenty of painful periods, period symptoms and period cramps.

I was not as badly off as some, who had very heavy periods, or the worry of irregular periods.

For me, the disappearance of any all of these issues was something I was very happy to see dramatically change via yoga.

Starting yoga brought me back to feeling human at that time each month!

I still had mood swings in the premenstrual phase, but nowhere near as extreme as before. 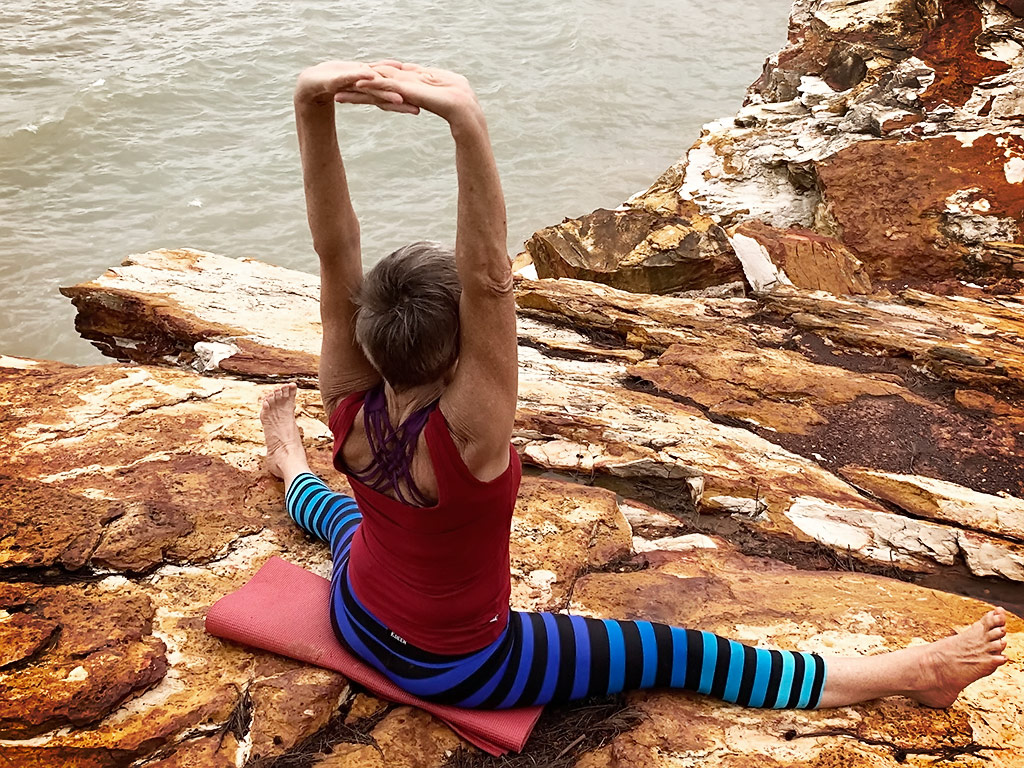 I hope my period pain stories encourage you to fix it with yoga, like I did!

Iyengar yoga has a unique system for handling periods time

My partner was often quicker than me to detect the onset of PMS symptoms and would suggest I go and do some yoga! Like a miracle, the yoga pose always worked to calm me down and soothe my nervous system.

When I was menstruating, the yoga teacher would insist that I do poses differently, as well as add different poses to the practice.

It was really the first time that I had been made aware of the need to act differently when menstruating. The teacher explained that during this time my energy is low, and so I should not overexert myself and stress my nervous system.

I am forever grateful that I joined an Iyengar yoga studio and became part of a tradition (via Geeta Iyengar) that honours the changes that women go through each month.

I believe taking time to rest and modify my practice each ovulation cycle is what helped me then go through to menopause, and have no noticeable menopause symptoms.

The poses I did before, after and during my periods time

When not menstruating, I practised a wide variety of yoga postures, including inversions. Inversions help stabilise hormonal activity and are very important for supporting the immune system, and helping one get a good night’s sleep.

Just before my period, I would switch to a practice that I knew would help reduce PMT or PMS symptoms. When my period arrived, I stopped inversions, and stopped jumping out into standing poses.

Instead, I did standing poses with props so I expended less effort. I could then maintain space in the pelvis, and this helped keep blood circulating in my pelvis. It also helped keep abdominal cramping and back pain at bay. I also practised supine poses which helped reduce heat in my body, and allowed me to extend my chest, and bring fresh blood in and around the pelvic area.

In addition, in order to stop me feeling flat or in a low mood, I would always do chest extending poses and supported backbends.

Forward bends are a wonderful family of postures that help relieve tension in the brain and soothe and quieten your nervous system.

For a few days after my period finished, I would start Inversions and do poses that would help return my body back to balance.

I now know that during the premenstrual phase is a perfect time to stop and step back from the busyness of everyday life.

It will help keep your mood swings under control and allow you transition easily through the various menstrual cycle phases.

You might think that it is not possible to slow down, but these yoga poses really make it possible.

Start and make some small changes in your everyday routine, give yourself “windows” of just sitting and relaxing during the day. Eat well, go to bed early at the same time each day.

Respect the changes that take place in your hormonal system each month and try to become more sensitive to your needs.

Your health and happiness depend on it. Try yoga.

Period suppression with drugs is not the first place I suggest

As a yoga teacher, in one to one private classes, I’ve already seen too many students have issues with period suppression via drugs.

Among other things, I’ve seen issues arise when students are wanting to return to their natural fertility cycle, and get pregnant.

Obviously, I’m not against birth control. I used it for years.

I’m just not yet convinced about totally suppressing periods. I’ve also read some of the literature on the issue, and it’s a worry.

That’s why I think its better to use yoga to deal with menstruation issues.

There’s also situations where menstruation can be a medical issue, (such as with especially heavy periods), and in those cases I suggest you contact a doctor.

But in other situations, or even in that situation, try yoga first.

Yoga saved me from menopause, and stopped my difficult periods.

Many other yoga students have told me similar period pain stories, and how they fixed it with yoga.

Studies have confirmed our experiences.

The earlier in your life you start yoga, and the more you do it regularly, the better it will work.

Among your yoga classes, I also suggest trying out Flametree’s Women Only classes. They deal with poses and theory to help a range of issues around menstruation, pre-menopause, menopause, post menopause, and more.