Online beginner yoga, or any other yoga, could probably benefit from doing some OMs.

It’s only in a few classes that we do an Om. It’s worth thinking about why that is, and if we should do more of it.

Essentially, in the in-studio and online beginner yoga, if we did Om more, newcomers may think we were too weird!

Beginners, and even many long-term yoga students, still think that yoga is mainly about its fitness benefits. As you may know, there’s many more benefits beyond just strength, health and flexibility.

Even when people understand that yoga benefits come from things like it’s impact on your glands, they still don’t realise that sounds can also have a significant part to play in the benefits that you get.

Once you look at the science and benefits of an Om, we probably should get over feeling self-conscious, or wierd, and just do more of them.

Below, I outline why. 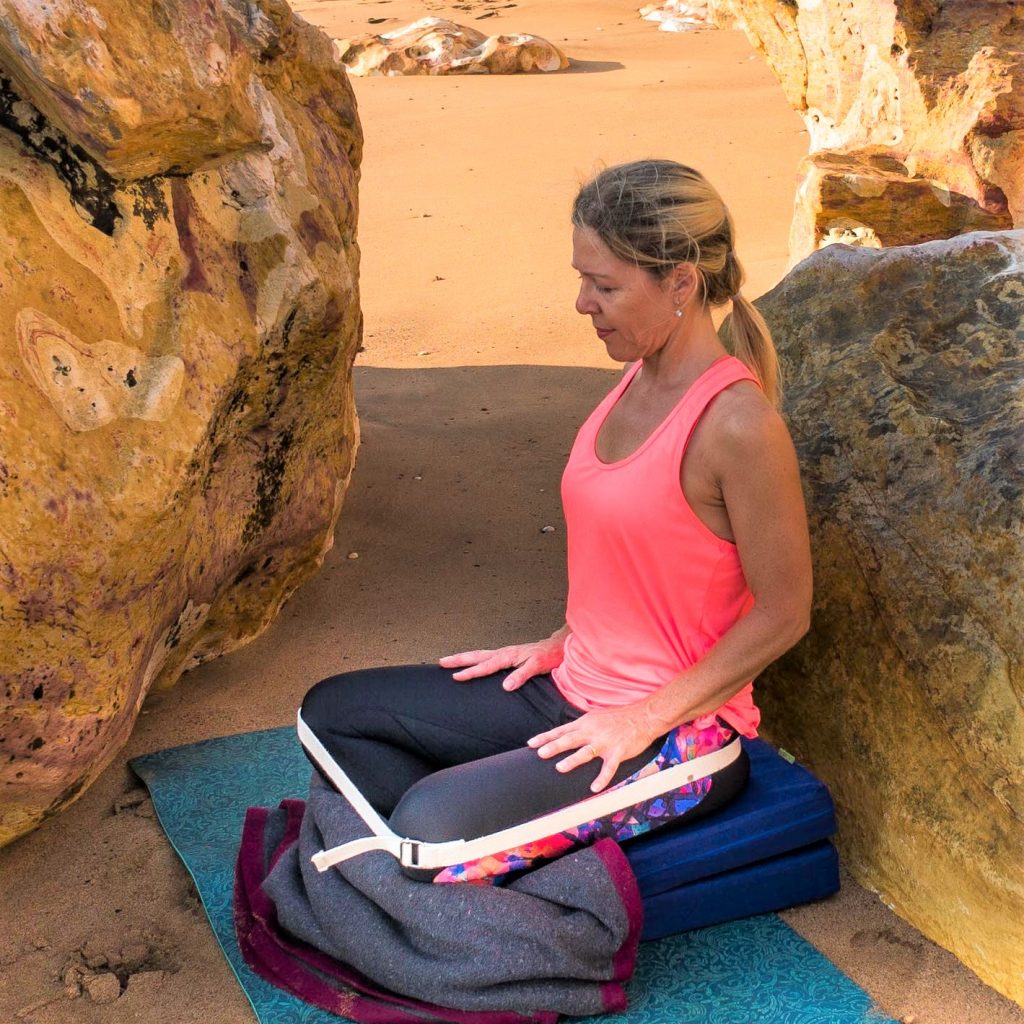 The science of the Om

I was also talking to a student teacher about his experience of teacher training at another studio.

He was amazed that the teacher trainer took time to show the yoga teachers how to make the sound Om.

He thought it was kind of obvious!

I now know that teaching a person how to Om made sense.

There are definitely ways you can get more effective at chanting and Om, and get more from it. I’ll also talk about this issue.

The OM, & yoga, is not about religion!

First, I just want to stress that yoga, and OMs, are not religious.

For some it is a very powerful way to start and finish a yoga practice.

For others brought up in the West it feels too foreign, or weird.

Confusion can arise because some may feel that they are involved in practising a religion. Some religions do chant Om.

Yoga, however, is not a religion. It is a secular discipline that promotes self-awareness. In the process, it makes you fit, strong and flexible.

When you understand the science behind chanting OM, I also think you feel differently about chanting OM.

The Om is a vibration that exists in nature

When an Om is done before and after yoga, it helps you tune in to your own internal vibration. It also helps focus and still your mind, as well as appreciate that you are part of a wider universe.

The word ‘OM‘ is made up of three letters A U M.

Using it as a chant has its origins in Hinduism, Buddhism, Sikhism, and Jainism.   It denotes spirituality.

AUM is the basic sound of the universe. Chanting Om helps connect and unite you to yourself, as well as to the whole universe.

So when it is chanted, it connects us on a vibrational level to everything in nature.

When OM is chanted, it vibrates at the frequency of 432 Hz, which is the same vibrational frequency found throughout everything in nature.

For example, when you go out and sit on a beach and watch the sunset, you experience the same vibrational frequency as when you chant OM. That’s a key part of why watching a sunset is so pleasant.

Chanting Om helps calm the mind.  It has the power to uplift, as well as to shift negative thoughts.

It also allows you to surrender and let go of all the “stuff” of your everyday life. It allows you to come into the present moment.

To chant at the start of a yoga practice helps cleanse and focus the mind. It develops intent. It helps you say to yourself: “Now is the time for yoga”.

The three letters AUM, when chanted, become OM. That’s because in Sanskrit when U follows A they coalesce into a long “o” sound.

How to chant Om

To produce the sound in the most effective way, take a deep breath in. Then, on the exhalation, chant OM.

I find closing the eyes allows you to more fully feel the vibrations that run throughout your entire body as you chant.

OM can be chanted silently or aloud.

Your whole body is used in chanting Om, from stomach up to the heart, mouth, and lips. Chanting Om also helps relax the stomach and deliver a feeling of complete peacefulness.

The health benefits of the Om

The actual chanting of OM has a very strong effect both physically and mentally.

The different syllables AUM vibrate at different frequencies and so they affect different organs and parts of the body.

Studies have shown that chanting Om can decrease stress, anxiety and heart rate. This is due to the direct effect on the parasympathetic nervous system.

The long exhalation that takes place during the OM, releases a response in the parasympathetic nervous system, due to the  stimulation of the vagus nerve.

Nitric oxide is increased by chanting

It has also been scientifically proven that chanting Om increases nitric oxide in the body.

Nitric oxide relaxes blood vessels in the respiratory system, and increases the flow of blood in the body. The effect of this is to protect against hypertension, heart attacks, and strokes.

Nitric oxide also contributes to the health of the immune system. In doing so, it acts as a defence against infection. It helps to kill and inhibit replication and spread of viruses in the body.

How many times should you OM?

Practice chanting Om and you shall see the benefits for yourself.

Some experts suggest chanting the Om up to 10 times, is about the ideal number of repetitions.

I suggest keep an eye on the effects over a week, a fortnight, and a month. Personally, I have found that some effects will only first be noticed over a few weeks. Other effects, such as being calmer, or sleeping better, may only take several days.

Other feelings, such as greater happiness, may be noticed, as you look back over several months.

Most of all, you may find that the effects creep up on you. After a certain time, you will realise that something has changed, and you’ll know that it is chanting Om that has made the difference.

Online beginner yoga and other deals

NEWCOMERS who can do yoga, or lapsed students, get 14 days unlimited beginner classes for just $29. Learn more.