If I could not do it, I did not do it! So, as a child, I did not get into sport! Here’s my very personal story about how I got into yoga, But it’s also about how I’ve found the best yoga for middle aged woman, as well as excellent yoga for older women, or for anyone.

I was also sick a lot with lung conditions, like asthma. Maybe sport could have helped, but I was not going there!

As an adult, I started yoga in 2001, and happily, it was with Chris Lalor, now from Flametree Yoga… when she taught elsewhere.

I went to a first yoga class and liked it. Unfortunately, I was not in any kind of beginner program, and the next class was a so-called “led practice”… where there is minimal instruction. That one did not go well, as I had no clue what I was doing.

When Chris started Flametree Yoga Studio, I went there from the beginning, those many years ago.

I stopped yoga for a while, when I went overseas, and I was also sick. For a bit, I also became more of a gym person.

But then my mother got really sick, and I came back to yoga to help me handle the stress of her being sick. 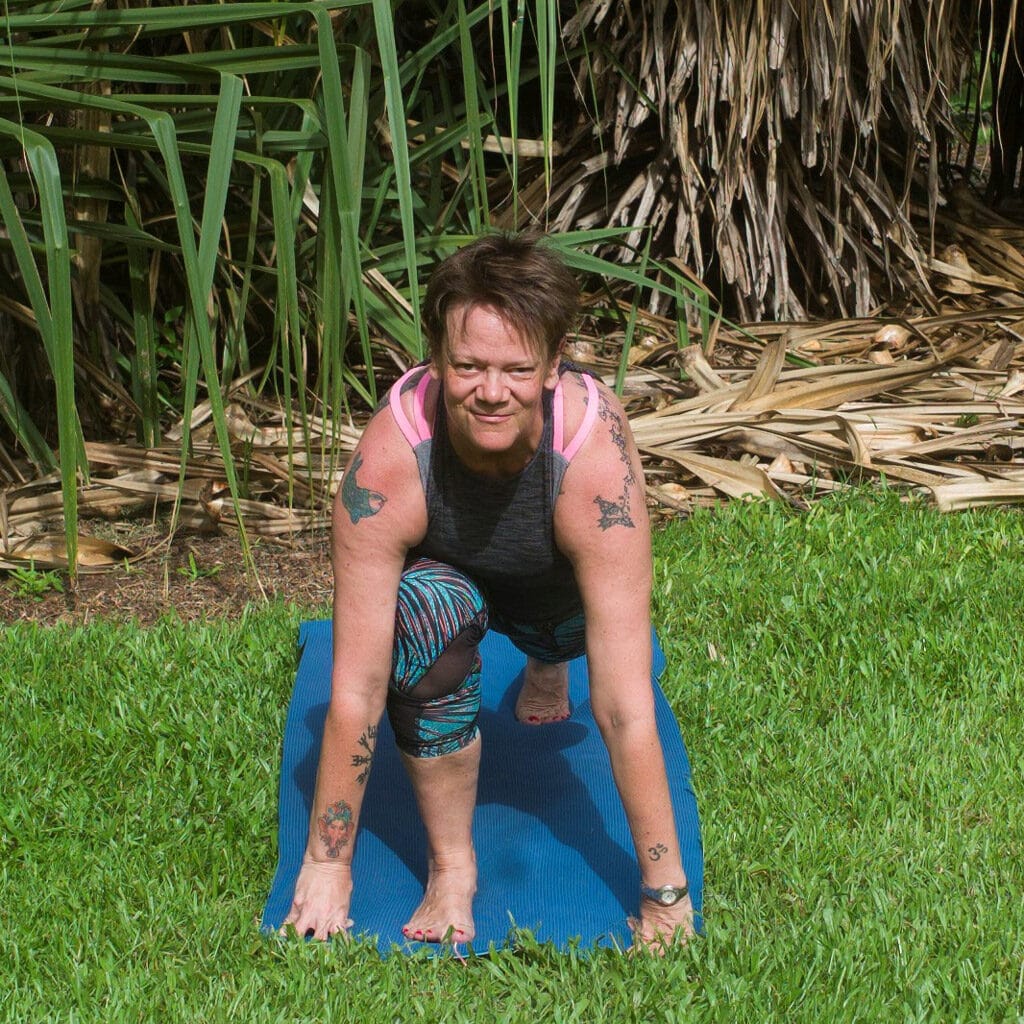 I thought I couldn’t do it!

Initially, I struggled with my own perception… all in my head… of my lack of ability at yoga.

So I spent time avoiding poses I did not like. I only did forward bends, and avoided the rest as best I could, including back bends, inversions, and standing poses.

If you know anything about yoga, you’ll know I was avoiding about 75% of the types of poses we do!

But even with what I was doing… or being asked to do via going to class, I saw and felt the benefits of what I was getting. For example, I noticed how it helped my breathing and health.

So I started to think about teaching yoga. That was very consistent with my background… where both I and other family members have been and are teachers.

In particular, I had a strong primary teaching background.

As I think it is for all who tackle yoga teaching, it has been a long and winding path.

My struggle with self-perception continued, and continues… as poses I once thought inaccessible become accessible. I’m sure this is familiar to all of us who pursue yoga … and no doubt other skills and disciplines.

As the science of yoga, and your own journey of mastery becomes apparent to you, you also get a better sense of who you are.

What teaching has taught me

I love teaching yoga. As a result, the time always goes very fast.

I also love seeing what students get from yoga.

The sense of exploration and fun that can be imparted to students, is very rewarding.

So I always look forward to teaching my classes.

Maybe best of all, I also now look forward to my own practice of yoga.

In Iyengar yoga, there is a rigorous process of training and assessment of teachers.

I used to throw up when thinking about what I could not do.

But I now see the rigorous assessment process as a huge gift. It makes you come to terms with who you are. It’s part of the internal journey towards mastery… and teaches you more about yourself in the process. 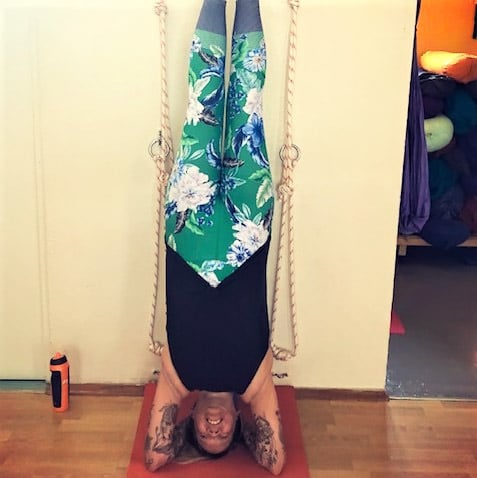 Health benefits of best yoga for middle aged woman, & the rest of use

The health benefits I’ve received from yoga have been huge.

All yoga is useful, as is most exercise. But the Iyengar style yoga that I do, plus the Women Only yoga that I also teach, is especially good. That’s why I think it is the best yoga for middle aged woman, along with everybody else.

The benefits start with posture, and the positivity and improved circulation that flow from that.

It’s also led to more resilience in my health. Now I don’t get every lurgy that’s going around.

With my asthma, I don’t have to use medication any more.

I’m also more aware of myself, and I can see when things are starting to slip. So I can then get more rest and sleep, and let the body heal itself.

I rest instead of partying!

This health journey gradually evolves, and continues to evolve. I’m making better choices as I listen to my body… and have the “ears”, feelings and perceptiveness to hear what my body is saying to me. Sorry if that sounds a bit like the lines of a popular song! But it’s true.

My friends can’t believe I have changed so much… as I used to be such a party animal!

Don’t get me wrong, I still enjoy life and my friends… but I just don’t have to overdo it.

My body is also more sensitive to stuff that’s not good for it… so it’s easier to avoid the things I should avoid.

In my relationships with people, I used to spend too much time trying to analyse what was going on.

Now I just let people be. I don’t go into their crap, and don’t expect or ask them to get into mine.

I’m also more aware of any attempt by others at manipulation. In a kind way, I just let it go.

That phrase “let it be” comes to mind.

I also don’t get into a flap at work anymore.

I’m more dispassionate about things, and calm. I don’t get rattled.

You learn this from doing poses that initially hurt a bit. When you learn that the discomfort of a pose will pass, and it does. This can be applied to life and other areas, like work, or relationships.

Now, I leave things in the past, and encourage others around me to do the same.

I’m living more in the present, and accepting that whatever happened in the past is over.

The first time you learnt anything, including a pose, you struggle.

When you first learnt to drive, you didn’t drive straight to some place a few hours away.

Learning yoga is like that… and that is one thing I’ve learnt and accepted.

And I know looking at others won’t help!

Everyone is different. We all have different bodies, different struggles, and different learnings.

My partner loves it

My partner does not do yoga… yet!

However, what he appreciates about me is that, because of yoga, I am more able to be present and communicate with him.

I am more in the moment, and clear, because I know myself better. So I can communicate better… with him and everyone else.

In contrast, I used to be a people pleaser. I would do what I thought other people wanted, instead of being my authentic self.

Now I don’t get involved in things that I should not be concerned with. I’ve learnt to understand acceptance. I don’t mean that I’m not concerned about things in the world that should concern us.

Among other things, this means that the environment I create for myself is peaceful, including in my relationship with my partner, and in our house and journey together. There’s no raised voices, or any such things. We are chilled.

My partner also tells others that yoga has been great for my health… and for making a peaceful, harmonious place for us both to be. I guess that’s all part of the de-stressing that is a big part of yoga.

It is also part of not trying to change people.

I don’t get annoyed about things. There are no upsets.

And I don’t tell myself stories about this or that. It just leads to resentment. I don’t go there, anymore!

Yoga for older women, or for anyone, is a career plus

There’s many ways that yoga has helped at work.

I’m now in a very responsible management position. Yoga has helped me get promoted to the role, and do the role.

That’s just another reason why this type of yoga is the best yoga for middle aged woman. It works for your career too, along with change of life, and much more.

The process I use is to just look at people’s strengths, and go with that.

I aim to let people be who they really are, and that works well.

It’s not all about ME!

I’ve let go of having to be at the centre of things. For example, at the time of writing, I am now working with many schools, and my approach is to facilitate them all to work together. My role is connecting them to work with each other, rather than being at the centre of it all.

Probably that flows from the way yoga has contributed to my perception of myself.

In the process, I’ve learnt to be less attached to reputation or praise.

As a leader, I lead from the back, letting people be at the front. I think someone famous said something about the best leadership being when people say “we did it ourselves”… or at least had the feeling that they had done it themselves.

In the process, I think it has accelerated my career, as I keep getting opportunities that I have not sought.

In my work, I of course have to do leadership courses. I notice they are in fact often around the so-called “yamas” of ancient yoga learning… so the leadership content of the courses feels very familiar.

For example, how to have difficult conversations, and things like that. I find so much of it is what I now perceive as common sense… even though we know sense is often not common enough!

As I read over this post to check my spelling, it reminds me again just how much that yoga has given me … massive personal growth, much better health, vastly improved relationships, peace of mind, calmness, a great career, learning how to learn and grow… and I’m only part way into the journey… WOW!

Yoga is truly the gift that keeps on giving. Give it to yourself… or to others you care about, or both.

Try the best yoga for middle aged woman, & for everybody

Flametree teaches genuine, modern classical yoga that fully delivers all the many benefits of yoga. It gets you into the correct positions to naturally help your body and mind work to maximise your health and full potential.

In particular, for a woman, especially someone looking for the best yoga for middle aged woman, consider either of both of the Women Only classes taught at Flametree Yoga Studio each week, both online and in-the-studio.

Start with any of these generous introductory deals

The next 4 week beginner yoga course, with up to 2 weeks free, is one good way to start.

There are even special, optional beginner classes like Gentle Yoga, Backcare Yoga, and Easy Restorative Yoga.

You can see them all in the beginner timetable.

Try Beginner Yoga via a week-to-week pass, online or in-studio, or both, with a 2 week free trial and money back guarantee. With this pass, you can start anytime.

The beginner double pass even gets you 25% off for both persons doing the beginner course.

Or use these free yoga videos to check out Flametree’s teaching style.

There’s more about how yoga works, what it covers, and how it helped others, on our yoga stories page.

One Reply to “Yoga for older women, & for me, or anyone! The wonders that unfolded. My story”