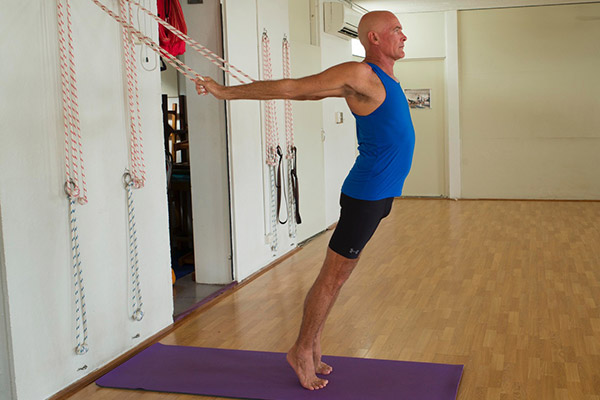 When I first came to Darwin… some 25 years ago… I used to get frustrated and bored at times.
At other times, I’d get a bit depressed… and at other times… ANGRY!
As a teenager, I used to surf.
It was a wonderful way to spend time and my huge energy. All that paddling around, and the exhilarating feeling from catching and riding good waves.
In Darwin, the huge Van Diemen’s Gulf ruled out any surf… except during cyclones!
I was based in Darwin as the captain of Paspaley pearling boats.
When I wasn’t working, I had time on my hands.
Alcohol and other recreational drugs weren’t my thing. There is nothing worse than a hangover and that horrible feeling of having said or done something stupid or tragic because of losing control.
A friend suggested yoga, and I tried it out… doing the sort of easy poses that I’m demonstrating in this Post.
To my surprise, I noticed that my anger was an energy, and I could express it in a meaningful way instead of being negative and destructive.
I could be positive, confident, creative and friendly.
Plus I had something to do that was never boring.
It was really amazing learning how to use anger energy to be positive.
No more swearing, or losing it, or throwing things around, or punching holes in doors… like I did as a young person.
I remember being told ‘don’t get angry’… but that didn’t help.
I needed to be educated on how to manage and express my emotions. Or I needed some process or activity that would take me down that path.
As an adult, the anger hadn’t gone away. I just expressed it in different ways… and of course it took a toll on my health, and relationships with those around me.
The yoga suddenly became an outlet for my energy.
I got more chilled out… and the anger just melted away.
As I went to more yoga classes, the calming and the fitness increased.
These days, I also look much younger than my age. It’s due to reducing the stress that’s all around us all the time, plus being healthy and fit.
Those who know me now would say I’m an easy going type. Little would they suspect my angry and unruly past!
On the pearling boat, I kept up my yoga by doing it in the wheelhouse.
The boat had long stretches where we were at anchor waiting for other boats to rendezvous with us.
One of the captain’s privileges was that I could lock the door to the wheelhouse, and people had to just leave me alone to do my yoga postures.
As long as I could do yoga, I was never bored.
Plus I steadily got a whole range of benefits that I never expected, and which I didn’t know would be very useful.
Try yoga.
Flametree Yoga, where I teach, has the best beginner yoga deal in Darwin!